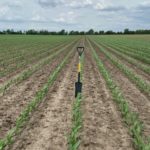 A agronomist says slow growth and development for corn across areas of the Midwest could increase the chance of heat stress this summer.

Michael Toohill with AgriSompo North America says crop emergence has been slow in the Eastern Corn Belt and Delta region. “Running through Central Illinois, even the corn planted in the late April is only V4 or V5 and the mid May corn is just V2 or V3. Generally, we’re two or three leaf stages behind where we’re at normally for this time of year.”

He says says crop emergence in the Western Corn Belt is behind schedule.

Summer-like temps to return to the Plains; more cool weather ahead for the eastern Corn Belt