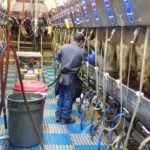 USDA says production in the U.S. for the month was 1.6 percent at 19 billion pounds with production per cow up 34 pounds from last year.

Georgia saw the largest increase in production during August, up nearly 15 percent, followed by South Dakota, up 14.5 percent.

Organic grower goes back to grain