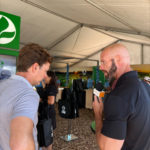 “And that brings about (at least) three immediate benefits. So we think about protection from lodging and green snap, those can be real challenges for growers mid to late season. It can rob yield (and) make harvest a mess.”

He tells Brownfield the other benefits are access to crops later in the season and plant density.