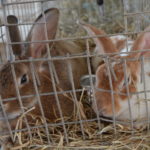 State Veterinarian Dr. Darlene Konkel tells Brownfield this virus is relatively new to North America. “We have had detections in the U.S., primarily in the southwestern states, but also some other states sporadically around the country including Minnesota and we’ve just had our first detection in Wisconsin in domestic rabbits.”

Konkel says this first case involves pet rabbits at a rural La Crosse County residence, and people should watch for signs of illness in domestic and wild rabbits.