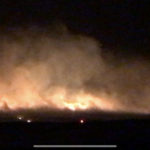 The head of Kansas’s wildfire task force is asking farmers and ranchers how the state can prevent, respond and recover from wildfires.

Ag Director Mike Beam tells Brownfield the state is seeking public input as it continues its comprehensive review. “I think we’re starting to identify what the state might be able to do to help in some situations or at least get our arms around what are our challenges are especially on the mitigation front.”

The Kansas State Fire Marshall says that since 2016 three fires have burned almost one million acres and Beam says its critical to hear from producers directly affected.

Corn for ethanol, soybean crush both up sharply on month