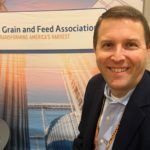 The potential of a rail strike still has the attention of the National Grain and Feed Association. CEO Mike Seyfert says the pending rail strike feels like déjà vu.

“We had hoped we would avoid a rail strike in September with the agreement reached between the unions and railroads with the Biden administration. Unfortunately, we’ve now had unions reject that agreement and we’re concerned we could be looking at a strike again.”

Seyfert says several labor unions have a deadline to ratify the proposal by the second week of December.