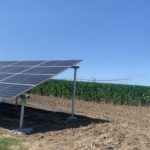 A Northeast Nebraska pork producer is using renewable energy to promote sustainable agriculture and offset energy consumption on his farm.

Jason Kvols tells Brownfield he installed 300 solar panels on the top of his hog barns two years ago and an app tracks the impact on the environment. “It coverts it to pounds of carbon dioxide saved through this solar system.  Over the two years, it’s up to 432,000 pounds of CO2 that my system has saved in production from two years.”

He says the $200,000 system can power his entire operation on a sunny day.

59% of South Dakota corn, 60% of soybeans rated good to excellent