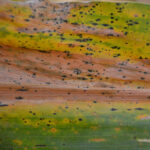 A plant pathologist says as farmers plan for the 2023 growing season the opportunistic characteristics of tar spot make fungicide applications even more important.

Tyler Harp with Syngenta tells Brownfield it can be very destructive, very quickly.  “ It’s one of those diseases that can go from 0 to 60 and 2 seconds,” he says.  “Most leaf spot diseases take some time to become severe and then you have time to kind of go in and manage it.”

He says in some instances tar spot has caused yield losses between 60 and 80 bushels per acre.  “Growers have learned that traditionally didn’t, maybe use much fungicide or didn’t use a fungicide that now they’re having to use it to help preserve that yield,” he says.

Harp says tar spot is less predictable than other leaf diseases and its impact varies from case to case.  “The earlier tar spot comes in the more damage and more impact on yield it will have,” he says.  “In 2022 it came in very late compared to 2021 and so the yield impacts of those fields that were not treated was significantly less.”

Plant pathologist says fungicide should be in the plans for 2023