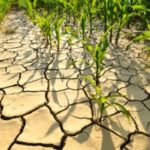 State Climatologist Dr. Justin Glisan tells Brownfield, “A dry pocket has formed where Nebraska, South Dakota, and Iowa meet. We’ve just missed out consistently on widespread rainfall events that we would like to see.”

He says farmers in that area have felt the impact. “Corn is rolling already in the morning, trying to preserve any type of moisture that it has. We’ve had some windy days extracting soil moisture out of the ground.”