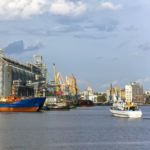 Two North American-owned grain facilities in Ukraine were hit during a Russian attack earlier this week.

In an email statement to Brownfield, a company spokesperson said Viterra’s Everi vegetable oil terminal in Mykolaiv was damaged by a missile strike.  There were no fatalities, and one employee was injured.  Two storage tanks caught on fire and a third tank was damaged.

A Bunge grain facility was also hit during the attack.  No employees were injured at the facility which has been closed since late February.