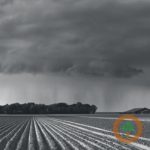 An Eastern Nebraska farmer says he recently received the most rain since June, but it was only a half-an-inch.

Quentin Connealy farms an hour north of Omaha along the Missouri River and says Thursday’s storm brought some relief to extreme drought. “Caught a couple of tenths here in August and July. But it’s amazing that a half-an-inch makes you feel pretty good and catch up on some bean irrigation.”

But, he tells Brownfield, the moisture won’t affect the corn crop.

Some, not all nitrogen prices are falling

Bill would bolster security in agriculture from foreign interference reintroduced