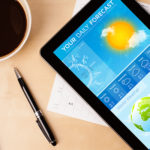 A Central Nebraska farmer says weather has been the biggest challenge this growing season.

“The weather this year just in general has been pretty brutal.”

Clay Govier tells Brownfield he started pivots about two weeks ahead of planting once it got underway in May, and they haven’t shut off since. “Even at this point in the year when we’re really starting to get into what is traditionally the heavy irrigating season, I don’t think we’ve ever irrigated so much.

Rains provide a boost for late-planted soybeans in Tennessee

Drought limits pasture conditions in Kansas, producer says he could run out of feed