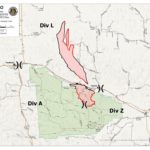 The latest wildfire in the Nebraska sandhills has burned nearly 19,000 acres of ranchland, but officials say it’s almost contained.

This week rancher Jason Hoffman told Brownfield conditions continue to deteriorate. “There’s places around here that have less rain than they did in 2012.  IT’s extremely dry.  This year with the extreme heat and big winds we’ve had, it’s wiped any moisture we’ve had out.”

He said there has been minimal relief from Mother Nature this year.

Much colder northwest; mild weather across the rest of the Heartland