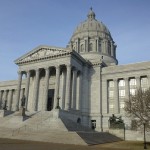 On Wednesday, the Missouri House and Senate each passed their own versions of a bill that would authorize agriculture tax credits. Republican State Representative Don Rone of Portageville argued in favor of the bill, saying it provides necessary incentives for farmers.

“In this bill, everybody has something in it,” Rone said.

Harvest expected to wrap up early on Arkansas farm