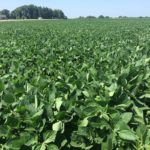 The USDA’s June soybean acreage estimate came in at 88.3 million acres which the University of Missouri’s Ben Brown says will tighten expected supply.

“That basically took 130 million bushels out of the new crop ballance sheet,” he said. “We won’t take 130 [million] out of that without rationing some demand.