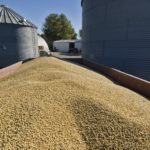 The USDA is proposing a change to U.S. soybean grading standards to remove the “Soybeans of Other Colors” designation. American Soybean Association Director of Government Affairs Virginia Houston says more discolored seeds are showing up at the elevator.

“Your contract may be for number one soybeans, but when you got to the elevator, you were docked to number two, because there was a certain amount of SBOC grade. A certain seed trait is causing the seed coat to discolor: the Enlist E3 bean.”

An exceptionally stormy weather pattern ahead next week for the Heartland, centered in the northern Plains, upper Midwest

Producers and the decisions that come with historic drought