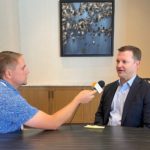 The head of the U.S. Grains Council says it’s too early to call the grain export agreement between Ukraine and Russia a success.

“I had a lot of doubts at the start that it would hold in the first place.”

President and CEO Ryan LeGrand tells Brownfield there’s been a significant increase in corn exports through three Black Sea ports. “When they were doing just the rain and barges through neighboring barges when the seaports were shut off, I think they only able to get about 20 percent of their typical exports out.

A good year for MFA Inc., but volatile year ahead

The role of inflation on food prices