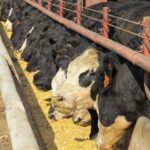 Mary-Thomas Hart, environmental counsel at the National Cattlemen’s Beef Association says the Food and Securities Act is intended to send a message. “This is going to indicate to the SEC, based on how many Senators co-sponsor it, what direction the Senate sees the SEC taking in this space,” Hart said. “I think it’s a broad message, not only to the SEC, but to the Biden administration.”

The Thune bill would require federal financial and securities regulators to estimate the impact of their rules on affected businesses involved in the agriculture or energy supply chains.  If rules are estimated to drive up food, energy, or gas prices, the regulators would then be prohibited from implementing the rules during times of high inflation.