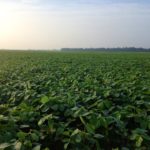 Randy Dickhut with Farmers National Company says there’s been an increasing number of $20,000-plus per acre sales. “Those are the ones that everybody sees and has been written about,” he said, “but a lot of land trades for much less than that. You’ll see a lot in that eleven-to-sixteen-thousand-dollar range too.”

He tells Brownfield there are several factors contributing to the extra-large dollar amounts.

Grassley says E15 bill may get pushed to new Congress