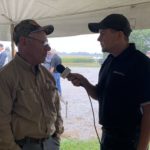 Timely rains across parts of the Western Corn Belt have been spotty and some Nebraska farmers say irrigation is the only thing keeping crops alive.

Matt Bailey says 90 percent of his crops are irrigated near Schuyler in the east central portion of the state. “Dryland is not good.  A lot is hanging on.  We were counting on a rain today, but I don’t think that happened. Under the pivots with a good well, they look decent.

May E15 sales a record in Minnesota