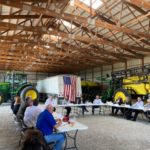 An Iowa farmer who participated in an ag market development roundtable with the U.S. Trade Representative says he’s “on the fence” about China.

“We want free trade, and there’s a lot of us that have the same interests. But when we look at what our governments are doing, there’s a lot of rhetoric going back and forth there that’s concerning.”

Following the roundtable in central Iowa Thursday, Trade Ambassador Katherine Tai said the administration is focused on free, fair, and resilient trade and has been navigating a very “tariff-rich environment.”

“At last count there were over $20 billion worth of tariffs (and) most of them I think in agriculture and food, that we’ve either lifted or been able to avoid because of a successful approach and program to negotiating resolutions.”

Tai says that is market-opening in the sense of taking leverage and converting it into constructive dialogue.

Iowa farmer leader “on the fence” about China

The first step is asking for help