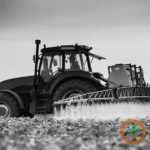 An eastern Iowa farmer says he’s focusing on several issues as he prepares for the next growing season.

Dave Walton says the price and availability of fertilizer is at the top of his list. “We’re waiting to get soil test results back to decide what exactly we’re going to put on for fertility,” he said. “It looks like another year of trying to stretch dollars. The fertilizer price has come down a little bit, but it’s still significantly higher than it was two years ago.”

He tells Brownfield grain markets are another concern.

NCBA calls for enhanced LRP in next farm bill