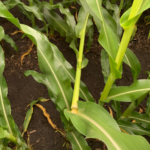 An Iowa-based agronomist says the crops in his area are very uneven this year.

Matt Nelson with Channel says they’ve had a lot of water and a lot of wind.  “Soils are saturated, we have standing water out in these low-lying fields,” he says.  “And the wind has caused low levels of green snap in some of these fields.  But, mainly root lodging.  Corn plants that have leaned over.  And will certainty prop themselves back up, and they will gooseneck, but still be fine.  And it shouldn’t impact productivity that much.”

He tells Brownfield the crop has been able to catch up some in terms of GDUs (Growing Degree Units), but we still need to do some evening out.  “We’ve just got crops at all different stages,” he says.  “Some that’s a lot bigger and a few that are even tasseling.  Uneven is kind of the update for how things look in my territory.”

Nelson says now is the perfect time to scout fields and look for any diseases or pests that could put added stress on the crop.