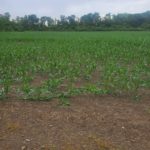 An Indiana farmer says this is the most expensive crop he’s ever raised, and it isn’t even in the bin yet.

Kron says this crop has faced challenges from the start and they had such a late start to the growing season, many fields were planted when they were probably still a little too wet.

Indiana farmer says this crop has had challenges from the start

The first step is asking for help