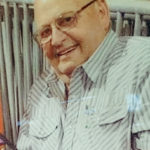 A long-time pig breeder and showman is now in the Wisconsin Pork Association’s Hall of Fame.

This year’s inductee is the late Robert Ellingson, who was involved in breeding and showing pigs since 1965 on the family farm near Poplar Grove, Illinois, just south of the Wisconsin border east of Rockford.

Kenneth Luety with the Wisconsin State Fair presented the plaque to Ellingson’s family Saturday. “This would be the 30th year that we have done this, so the pork producers sponsor it and the Hall of Fame members are actually the ones that decide who is the lucky recipient every year.”

Robert’s son Mike Ellingson says his father passed away April 4th after 47 years of showing pigs at both the Wisconsin and Illinois State Fairs.