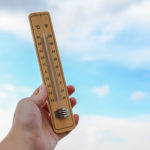 “There were a couple of stations that did get close. Monmouth got to 34, Macomb got to 33, but we didn’t see that below freezing mark.”

Ford saw reports of frosted fields as far south as I-64.

Urea costs give farmers an opportunity, if they can get it

Eat or freeze your Thanksgiving leftovers within four days