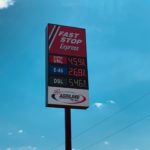 GasBuddy’s Patrick De Haan tells Brownfield, “Initially, Hurricane Ian was likely to affect an area including the Florida Panhandle, maybe brushing refineries in Louisiana,” he said. “But the good news is Hurricane Ian steered away from some of those major refineries producing diesel and gasoline.”

He says this is good news for farmers with harvest underway, but… “Hurricane season is not yet over,” De Haan said.

Temps to vary across the Heartland, an active pattern ahead