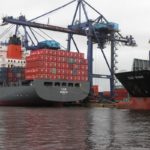 An official with the Great Lakes & St. Lawrence Seaway says it is hard to tell if increased ag product movement on the Great Lakes is because of transportation issues on the Mississippi River.  Peter Hirthe tells Brownfield, “We have been up somewhere between thirty and forty percent on the U.S. ag exports since the beginning of the season. I think we came out of the gate really, really strong in late March and early April and we really haven’t let up.”

And, that means Great Lakes traffic was up before Mississippi River levels became critically low.

How are you buying ag inputs?