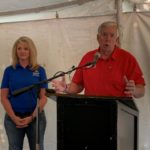 The drought’s impact on agriculture varies across different parts of the Corn Belt.

Missouri Director of Agriculture Chris Chinn tells Brownfield crops in the northern part of the state look good, but southern Missouri farmers haven’t been as lucky.

“Some areas of the state are probably going to have record-breaking yields and others are not,” Chinn said. “It’s going to be a tough year for some of our farmers in the state.”