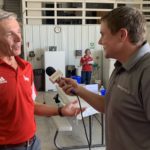 The chancellor of a midwestern land-grant university says the national labor shortage has created strong demand for students to enroll in ag-related majors.

Nebraska’s Ronnie Green tells Brownfield enrollment is at its highest level and the trend started in 2012. “There was a deficit nationally in the number of students to fill the number of jobs across all sectors of agriculture.  That gap still exists.  It’s not as marked as it was say in 2016 and 2017, but there’s still a deficit.”

He says internships help close the gap, but there aren’t enough to fill the demand in some cases.