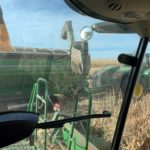 Meaghan Anderson is with Iowa State University. “Even though we had excellent field-wide yields in a lot of areas, we did see that edge effect issue pop up,” she said, “in particular in some of those drier areas.”

She tells Brownfield the cause is unknown, but… “I think one really good theory is there is increased evaporative demand on those edge rows, particularly on the southern and western sides of fields, but it just really depends on where the winds are coming from.”