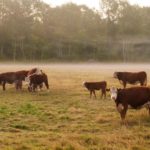 A livestock economist doesn’t expect much change in the cattle market in 2023.

Lance Zimmerman with Rabobank tells Brownfield producers are holding back replacement heifers as they battle drought and high feed prices. “What I’m really focused on is what total female cattle slaughter looks like, not just the cow side but also those young heifers, and when you look at that total number, we’ll probably end 2022 around 17.6 million head of cows and heifers being slaughtered this year.”

And, he says that will have implications beyond 2023.

A sharp temperature gradient generates an active pattern for the Nation