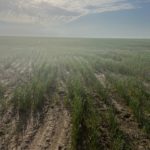 An author for the National Drought Monitor says extended dryness will likely intensify throughout most of the Midwest and areas of the Delta this summer.

He says the severity of drought for areas of the Eastern Corn Belt will depend on moisture that’s been received in June or July.