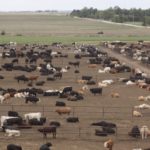 “We had the Dakotas sell out last year and now Texas and Oklahoma, and even some in Missouri,” said Jeff Reed.

“A lot of people are talking about not getting back into the cattle industry because of everything that’s going on with the packers and legislation,” Reed said.