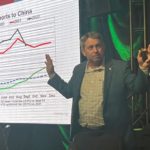 Gregg Doud says Mexico’s president has made his position clear on the proposed ban and Doud says he isn’t sure what the US government can say at this point to resolve the issue, “It’s going to have to be the Mexican industry that helps him understand, it’s not in Mexico’s best interest to do battle over this particular topic.”

Last week, Ag Secretary Vilsack met with Mexico’s president discuss the ban in person and the dialogue continues with Mexico.

Corn down with soybeans, wheat mixed ahead of WASDE report

Dry conditions will stick around through spring in Western Corn Belt