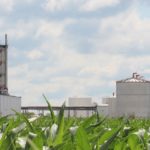 The Vice President of the U.S. Grains Council says corn exports in the new marketing year are off to a slow start.

Cary Sifferath tells Brownfield once the bulk of harvest is underway movement should pick up.

“We’re seeing the strength of the U.S. dollar versus other currencies, specifically our South American competitors in Brazil and Argentina, is affecting our competitiveness,” he says.