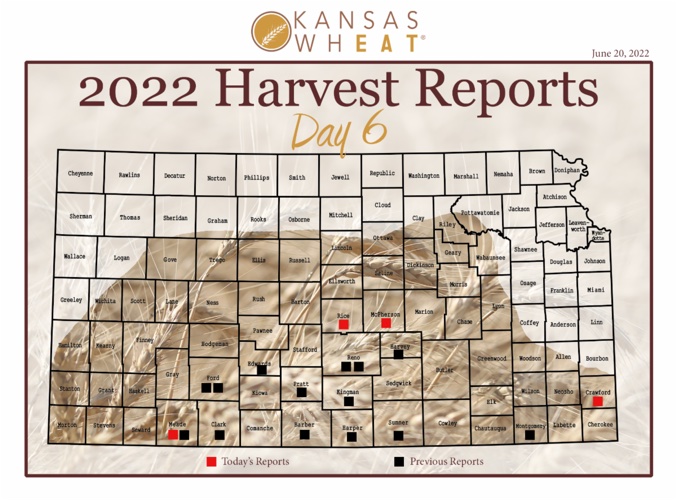 Monday’s harvest report is a tale of the widely-varying growing conditions across the state, from abandoned acres in drought-afflicted southwest Kansas to ample moisture and good yields in the southeast.

Harvest is languishing in Meade County, where the quality of harvested wheat is good, but the bushels just aren’t there, according to Mike Schlochtermeier, general manager of Meade Coop Elevator & Supply Co.

“In a word, slow,” Schlochtermeier said. “We started on June 9, when we took in our first load, and this is the slowest — volume-wise — I’ve ever seen it.”

Dryland wheat was too far gone by the time the area did catch some raindrops, but did help out irrigated wheat — a little — since it was further behind in development. He’s had several producers pull into a field, do a test cut to verify yields and then call the insurance adjuster because the field only pencils out to three or seven bushels an acre. Then the harvest crew pulls out and moves on, to try to find a field that will be worth cutting.

Schlochtermeier’s fears going into harvest were shriveled kernels and low test weights, but the quality is a bright spot. Between all of the Meade Coop locations, test weight is averaging just under 62 pounds per bushel, moisture at 9 to 10 percent and protein at 12 to 12.5 percent. For fields that are being harvested, many producers are making 10 to 20 bushels per acre with top yields coming in the 40 bushel-per-acre range.

Schlochtermeier expects most area growers to finish up by the weekend.

“By then, they’ll have cut what they are going to cut,” he said.

In central Kansas, yields are coming in a little better, ranging from 25 to 55 bushels per acre.

Derek Sawyer, who farms in McPherson County, reported yields in the mid 50s and test weights of 60 pounds and above. Since he has only delivered four loads to the elevator, he didn’t have proteins to report; however, he has also harvested the Agripro variety SY Monument and delivered that to Grain Craft, as it is on the Preferred Variety List.

Tony Andrews from Lyons in Rice County reported test weights of 60 pounds per bushel and above. He expects his farm to average 25 to 30 bushels per acre. Andrews said the rains didn’t come into the area until too late. At that point, it just kept them out of the fields. They expect harvest to wrap up for their operation on Wednesday. Andrews farms with his in-laws, and they hired a custom harvester crew from Nebraska, who is looking for another job starting on Thursday. With lower yields across the region and increased price of fuel, many custom harvest crews have been on the lookout for acres to cut.

Brian Sieker from Chase in Rice County reported test weights ranging from 59 to 64 pounds per bushel. He reports that the AgriPro variety Bob Dole held on pretty well in his sandy soil. Since Sieker has an after-market parts sales business, he tests out products before he sells them. To help his customers make good choices on things they might use or need based on their unique situation, he is trying out a feature for grain headers to help harvest short wheat.

Soft red winter (SRW) wheat harvest is just getting started in Crawford County with combines starting to roll in the middle of last week. It’s too early to report many yields and quality thus far is a bit hit-and-miss, according to Brice Elnicki, general manager/CEO of Producers Coop Association in Girard.

The growing season in this far southeastern part of the state differs greatly from wheat production further west. Here, the area typically receives adequate moisture over the winter and doesn’t have winterkill issues. Generally, the local SRW wheat crop receives adequate rainfall — which is why producers plant soft wheat varieties with disease tolerance packages, rather than the drought-tolerant hard wheat varieties planted further west. Elnicki explained producers want a dry end of May and start of June to head off quality concerns like sprouting. Good yields come in at 80 bushels per acre, 100-bushel wheat is very good and 110 to 120 bushels per acre is “damn good.” Harvested SRW wheat will be marketed to domestic flour mills in the Kansas City area.

This year’s growing season was good, but a little wetter than producers would prefer. The weather dried out in the last two to three weeks, which removed pre-harvest quality concerns. Early yields are coming in between 80 to 100 bushels an acre, not a chart-topper, but good results. Average test weight is 60.8 pounds per bushel and moisture is 12.3 percent.

While the majority of wheat growers in the area did spray fungicide, the ones that did not are seeing low incidence of vomitoxin, with less than 15 percent of fields affected, Elnicki reported.

Nearly all of the SRW wheat acres in the area will be double-cropped to soybeans, but Elnicki said area producers are waiting for rain later on this week before they get started.