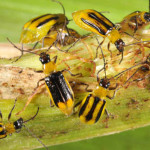 An eastern Iowa farmer says corn rootworm pressure is back on his farm for a second straight year, but he’s better prepared this go-round.

“A couple of those spots is where we are seeing some of those adult rootworm beetles,” he said. “We used an insecticide on the planter, and we’re going in and using some insecticide with our fungicide to help control those.”

He says they are already seeing positive results from their management practices.