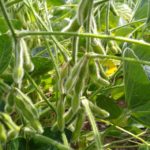 Brazil’s equivalent of the USDA has raised its soybean production outlook.

CONAB now has Brazil’s soybean crop at 153.538 million tons, up 1.186 million on the month, with planting just over the halfway mark.

Brazil’s critical second crop, the largest of the three crops and the source of most of their exports, is projected at 96.271 million tons, down modestly from the previous guess.

U.S. cotton crop down on year due to higher abandonment