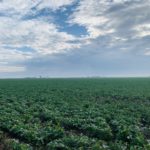 A central Indiana farmer says he’s optimistic about his soybean crop this year.

Josh Miller tells Brownfield soybeans were stressed early.  “But, soybeans can take stress early,” he says.  “We’ve had a lot of timely rains here from the middle of July to present day.  We have a healthy crop and a good crop.  And we’ve continued to get some rains.”

However, he says he’s uncertain about his corn crop and is hoping for about average yields.  “We went 42 days with unseasonably hot weather, unseasonably hot weather from the first part of June to the middle of July,” he says.  “Corn plants are finicky, and they don’t like to be stressed.  The corn plants were definitely stressed, but thankfully we didn’t pollinate during that heat.”

And, Miller says wheat yields this year were above average.