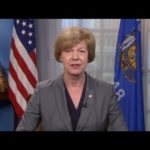 Tammy Baldwin tells Brownfield some tax incentive provisions from the Defend the Blend Act were moved to the Inflation Reduction Act signed by President Biden Tuesday. “(There are) tax incentives for biodiesel and renewable diesel and ethanol. Also, there’s some focus on renewable aviation fuels. That’s a smaller piece but it’s also important. And, also biofuel infrastructure investments.”

Baldwin says the biofuel infrastructure investments are important because many fueling stations don’t have the ability to sell biodiesel blends and higher ethanol blends.

Baldwin: Inflation Reduction Act not the end for Defend the Blend Act

How to hit the ROI bullseye with nitrogen applications

A near-seasonal, early Autumn weather pattern ahead across the Heartland

A drier pattern to continue across the Heartland, with near-seasonal temperatures