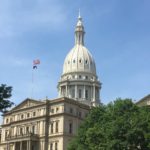 Michigan Governor Gretchen Whitmer has announced several cabinet member changes for her second term including a new director of the Michigan Department of Agriculture and Rural Development.

Deputy director of the department Kathy Angerer will now serve as acting director as Gary McDowell plans to retire at the end of the year. Angerer has been the deputy director for the past six months. She’s also served as a past state representative, director at AT&T Michigan, and the city manager for Hamtramck.

MAC growing along with Michigan production