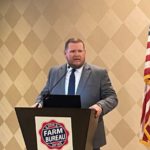 Agricultural groups including American Farm Bureau are closely watching railroad negotiations as the deadline to avert a national strike approaches.

Andrew Walmsley is a senior director of government affairs with American Farm Bureau.

“The rail network is critically important not only to the economy but to American agriculture, especially as we head into harvest season,” he says. “Not taking sides one way or the other, we just need Congress to step in if there is a strike or lockout to ensure our railways are moving the goods that we need them to move.”

Railroads and rail labor have until Friday to reach an agreement to prevent a lockout or strike after the Presidential Emergency Board published a proposed settlement in August.