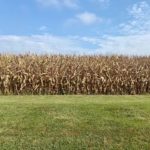 An agronomist in Western Nebraska says crop conditions are variable as harvest gets underway.

Marcie Oelke with Beck’s tells Brownfield despite severe to exceptional drought, there’s still some potential for a good crop. “We still have a lot of stuff under irrigation that will make good corn, but it’s been tough.”

As for dryland corn, she says many producers started chopping silage last month.  “We had a lot of silage get chopped early on dryland stuff that wasn’t going to make corn.

Harvest expected to wrap up early on Arkansas farm

Harvest running ahead of schedule in southwest Iowa