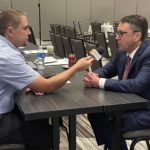 The CEO of the American Coalition for Ethanol expects EPA to authorize year-round sales of E-15 in the Midwest in the near future.

Brian Jennings tells Brownfield earlier this year eight Midwestern Governors asked the agency to lift the permanent summertime restriction on E15 sales.  “It is our expectation that EPA is in the process of putting forward a notice of public rulemaking that would support the request from those governors.”

Live cattle mixed, feeders up ahead of inventory report