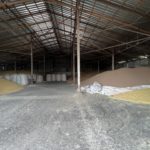 A state senator in Ukraine says farmers are running out of room to store grain.

Tom Brewer of Nebraska says harvest is underway and poor road conditions are making it nearly impossible to transport grain. “They’re moving so many tanks on trailers that weren’t designed for that weight and they’re tearing the roads up horribly.  To move the farm products in the future is going to be more and more challenging because you’re literally going to rip up your equipment trying to get it from point a to point b.”

He doesn’t anticipate that changing until the war is over.

A lawmaker in Ukraine says infrastructure is crumbling as crops are piled in fields, makeshift buildings