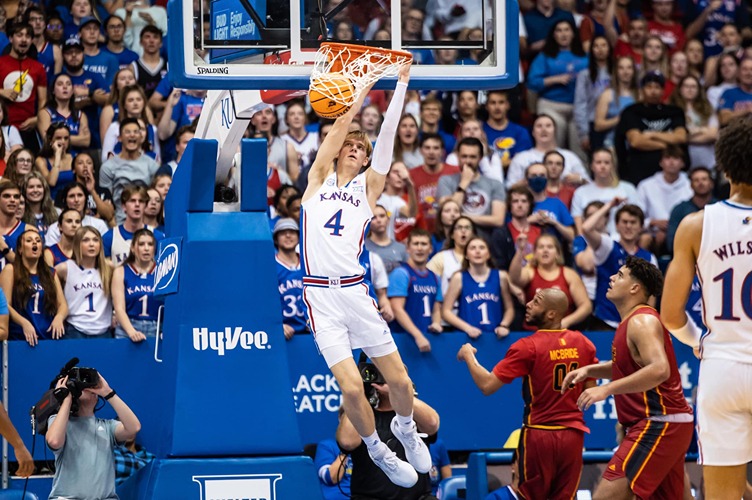 LAWRENCE, Kan. (KUAthletics.com) – Behind 23 points from redshirt-junior Jalen Wilson and 20 from freshman Gradey Dick, No. 5 Kansas men’s basketball kicked off the 2022-23 season with a 94-63 exhibition win against Pittsburg State Thursday in Allen Fieldhouse.

It was less than a stellar start to the first half for the Jayhawks as the Gorillas stormed out the gate with a 12-0 run after tip. A steal from senior Kevin McCullar Jr. sparked a Kansas run allowing the Jayhawks to lead for the first time at 27-26. From there, the lead changed twice with the Jayhawks pulling away and taking a 39-34 halftime advantage.

In the second half, the Jayhawks added to their lead going on a 15-2 run to start the period. Wilson scored 13 of his 23 in the opening half, while Dick had 13 second-half points, which included a perfect 2-for-2 from three-point range. McCullar was the only other Jayhawk in double figures with 13 points for the contest.

The night began with a moment of silence for remembering former Kansas forward Gethro Muscadin who passed away on Monday, Oct. 31.

The next video was a montage and banner unveiling that was dedicated to head coach Bill Self and his father, Bill Self Sr., who passed away late last year. The banner revealed part of a phrase that Self’s father used to tell him and his siblings while growing up and one that was embodied by the 2021-22 teams’ journey to the NCAA Championships, “Just Load the Wagon.”