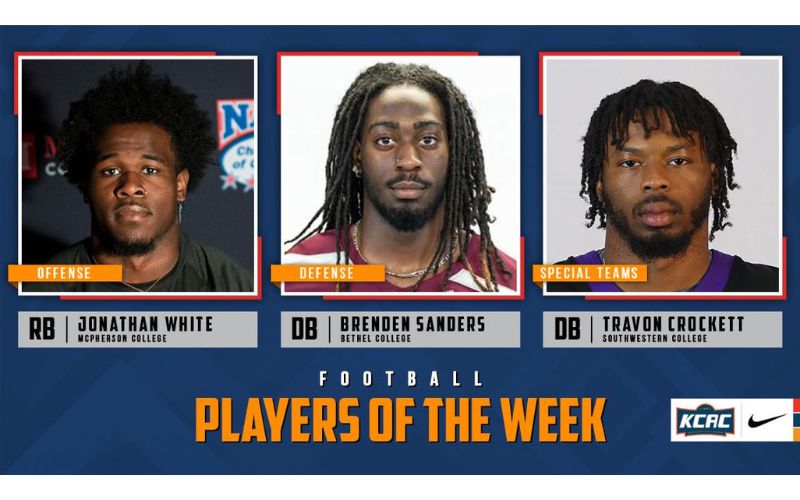 WICHITA, Kan. (KCACSports.com) – Jonathan White of McPherson College, Brenden Sanders of No. 22 Bethel College, and Travon Crockett of No. 6 Southwestern College have earned this week’s KCAC Football Offensive, Defensive, and Special Teams Player of the Week honors, respectively, the conference office announced Monday. The three student-athletes were selected for their performances from Sept. 12-18 by a vote of conference sports information directors.

White played a huge role in the Bulldogs’ 27-18 victory over Ottawa on Saturday, contributing in both the rushing and receiving attacks. He rushed for 279 yards on 20 carries, for an average of 13.9 yard per carry, and picked up two rushing touchdowns on the day. This performance moved him up to No. 8 in the NAIA in rushing yards. White also caught three passes on the day, tied for the team lead, and picked up 25 receiving yards.

Sanders played a major role in the Threshers’ upset of #9 KWU. The junior defensive back was lined up against one of the Coyotes’ top wide receivers in Drevon Macon. Sanders played a big part in holding Macon to just 57 yards on four catches. Sanders forced a fumble after laying a big hit on a Coyote in the first quarter. He also took an interception 46 yards to the house for a pick-six that tied the contest at 7 in the first quarter. The Threshers held the Coyotes to more than 100 yards under their season average so far in 2022.

Special Team Player of the Week

Crockett played a huge role in Southwestern’s 32-14 win over Saint Mary, as he blocked and returned a punt for the first Moundbuilder touchdown of the game early in the second quarter. Additionally, later in the game, he made a tackle of a Spire runner in the end zone to record a safety.