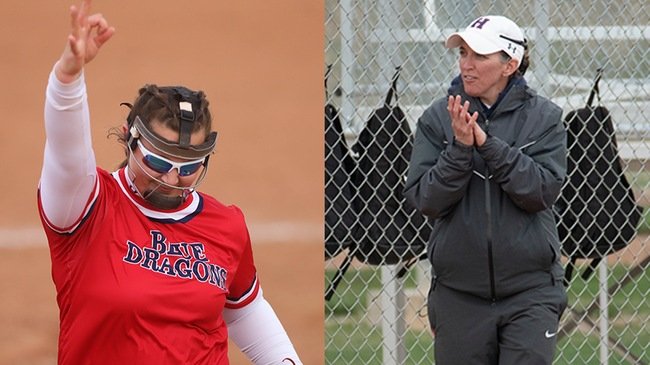 Riley Wertz (left) is the 2022 KJCCC Freshman of the Year. Head coach Jaime Rose in the KJCCC co-Coach of the Year. A record eight Blue Dragon players earned all-KJCCC honors in 2022.

By Hutchinson CC Sports Information
HUTCHINSON –
With the release of the Jayhawk Conference Division I Softball teams on Monday, the list of historical achievements by the 2022 Hutchinson Community College Blue Dragons grew even larger.

With a total of eight Blue Dragons selected, that is the most players to earn postseason awards in one season in team history. Also, head coach Jaime Rose earned her first league Coach of the Year award, sharing the honor with Butler’s Doug Chance.

Riley Wertz
was named the Jayhawk Conference Freshman of the Year as well as being named to the all-KJCCC first team. Freshman catcher

Emily Munson
were named to the All-KJCCC second team. Shortstop

The Blue Dragons completed one of the best seasons in team history, finishing third in the Region VI Tournament on Sunday in Dodge City. The No. 15-ranked Blue Dragons were 41-8 overall and finished second in the Jayhawk Conference with a 29-3 record, the conference win total was another team record.

Wertz was the Blue Dragon ace coming out of the bullpen in all 36 appearances she made in 2022– fourth most in single-season history.

Wertz posted a 13-1 record with a 1.35 earned-run average this season with a Blue Dragon single-season and career record and NJCAA-high nine saves. Wertz won her first 10 decisions of the season and her ERA is the first sub-2.00 mark since Holley Kelley in 2016.

The freshman right-handed pitcher from Maize struck out 152 batters in 82 2-3 innings. Wertz’s 152 strikeouts ranked sixth on the Blue Dragon single-season strikeout list. She had at least one strikeout in all 36 appearances.

Wertz set a Blue Dragon single-game record with 18 strikeouts against Garden City on March 19. She had an 11-strikeout performance over 4 2-3 innings against Murray State on Feb. 19.

Wertz also had plenty to contribute at the plate as the Blue Dragon designated player for most of the season.

JAIME ROSE
– Co-Coach of the Year
The 2022 season will be one of the most memorable for the Blue Dragons’ 18th-year head coach, who earned the first KJCCC Coach of the Year award in her career.

The Blue Dragons finished 41-8 – the 41 wins are the second most in team history and the eight losses tied for the fewest in program history. The Dragons’ 29 KJCCC wins are also an all-time program record.

Region VI champion Butler is 46-2 entering the NJCAA Tournament. The only losses the Grizzlies sustained came against Rose’s Blue Dragons – 6-5 on March 5 in El Dorado and 3-2 on April 6 at Fun Valley.

The Blue Dragons had two 13-game winning streaks this season, tying for the fourth longest win streaks in program history.

Already the program’s all-time coaching victories leader, Rose reached milestone win No. 500 with the Blue Dragons after a 10-7 victory at Dodge City on March 7.

ALLIE STIPSITS
– 1st Team
While her offense steadily improved through her freshman season, it was apparent early that

Allie Stipsits
was a tremendous catcher.

The freshman from Olathe threw out 34 percent of base stealers this season, nailing 17 baserunners. She also fielded .988 with only four errors in 328 fielding chances and had only three passed balls.

Stipsits had a 4-for-4 game against Barton in Game 2 of a doubleheader at Great Bend on March 25. In the first game of that doubleheader, Stipsits had a clutch game-tying two-run double in a four-run rally in the seventh inning in a come-from-behind 7-5 victory.

NATALIE BEVAN
– 2nd Team
The third-year sophomore from Augusta had a strong season hitting cleanup and playing third base for the Blue Dragons this season.

Bevan fielded .917 at third base this season.

Bevan concluded her Blue Dragon career second in all-time RBIS with 115, tied for 10th with 14 home runs, seven in total hits with 125 and tied for sixth in runs scored with 94. She also tied for fourth with 33 career doubles.

HALEY MILLER
– 2nd Team
The Blue Dragon center fielder from Buhler displayed a little of everything in her sophomore season from her speed around the bases with 24 bunt hits, three triples and inside-the-park home run to her tremendous game-saving catch in deep center field against Butler to preserve a 3-2 victory on April 6.

Miller was the Blue Dragons’ leading hitter this season with a .401 batting average (63 for 157). She had an on-base percentage of .429 with a perfect 16 of 16 in stolen base attempts. Miller had eight doubles and a career-high six home runs this season. She scored a team-high 54 runs and had 30 RBIs.

Miller’s 63 hits were second most on the Blue Dragons. She was one of three Hutchinson players to reach 60 this this season.

Miller has 17 multi-hit games, including a career-high four hits against the Ottawa University JV on Jan. 29. She had five three-hit games.

CARLEY STERNEKER
– 2nd Team
Making the move from first base to left field this season,

Carley Sterneker
didn’t stop contributing at the plate in earning all-conference honors for a second-straight season.

The Maize South product had six games of three or more hits. She had a season-high four RBIs in March 2 in an 8-0 win over Colby.

Emily Munson
quickly assumed the No. 1 starting slot in the Blue Dragon rotation.

After a couple of shaky starts early in the season, the left-hander settled in and produced a tremendous season.

Munson had the only four complete games of the season. Her best effort was a seven-inning complete-game one-hitter against Dodge City on April 13 at Fun Valley. Munson struck out a season-high six batters twice this season against Barton and Pratt.

MADISON GRIMES
– Honorable Mention
While her numbers weren’t what they were during a second-team All-America season in 2021,

Madison Grimes
was still the Blue Dragons’ team leader without a doubt this season.

Grimes hit .370 (61 of 165) with five home runs and 41 RBIs. She had 13 doubles, a triple and scored 44 runs. Grimes led the Blue Dragons with 23 stolen bases in 24 attempts. Grimes closed the season on an eight-game hitting streak. She had a season-high three hits twice, going 3 for 4 with RBIs and a home run against Dodge City in the Region VI opener on May 6.

Defensively, Grimes had a .953 fielding percentage with nine errors in 213 defensive chances.

Easton Swanson
still had a strong season in right field for the Blue Dragons.

Swanson had a season-high three hits, going 3 for 4 with a go-ahead single in the top of the seventh in a 7-6 Blue Dragon victory at Seward county on April 27.

Swanson had a memorable final at-bat as a Blue Dragon with a solo home run on Sunday against Seward County.

The freshman from Cross Timbers, Missouri, had 14 doubles, one triple and two home runs this season, scoring a team-high 51 runs and driving in 31 from the leadoff spot. Dougherty had five stolen bases and had an on-base percentage of .466. She had a .985 fielding percentage with two errors in 131 fielding chances.

Dougherty put together a 17-game hitting streak, the fourth-longest streak in Blue Dragon history this season. She hit .474 in two-out situations with 12 two-out RBIs. She had three four-hit games and four other three-hit games.

Steinert Reaches Podium on Day One of NJCAA Championships