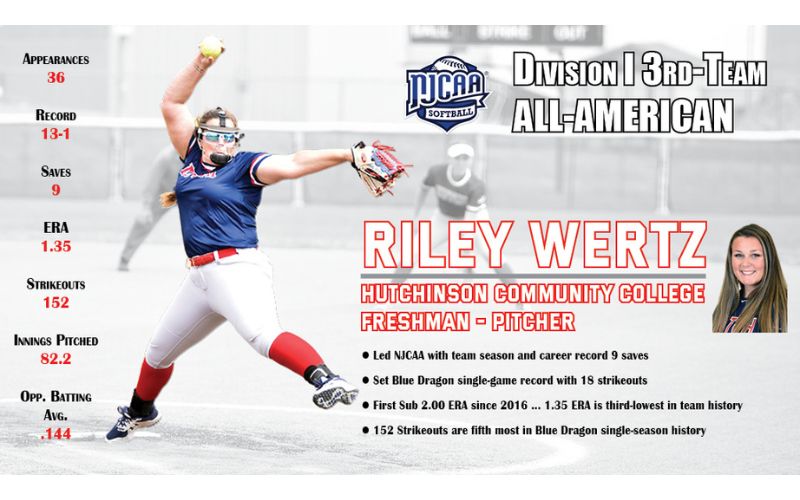 HUTCHINSON – Leading the nation in saves this past season, Hutchinson Community College freshman pitcher Riley Wertz was named a third-team NJCAA Division I All-American on Tuesday.

Wertz played a major role in Hutchinson posting a 41-8 overall record and finishing 15th in the final NJCAA Rankings. The 41 victories were the second-most in program history. The Blue Dragons went 29-3 and finished second in the KJCCC this season and were third in the Region VI Tournament.

Wertz, a freshman from Maize, posted a 13-1 record with a 1.35 earned-run average this season with a Blue Dragon single-season and career record and NJCAA-high nine saves. Wertz won her first 10 decisions of the season and her ERA is the first sub-2.00 mark since Holley Kelley in 2016.

The 1.35 ERA is the third-lowest in program history.

For just the second time in program history, Blue Dragon softball has All-America players in back-to-back seasons. Last season, Madison Grimes was a second-team All-American. The last time the Dragons had back-to-back NJCAA All-Americans was 1986 and 1987.

Wertz was already named the Jayhawk Conference 2022 Freshman of the Year. She was also a first-team all-Jayhawk and All-Region VI selection.

Wertz was the Blue Dragon ace coming out of the bullpen in all 36 appearances she made in 2022 – fourth most in single-season history.

The freshman right-handed pitcher struck out 152 batters in 82 2-3 innings. Wertz’s 152 strikeouts ranked sixth on the Blue Dragon single-season strikeout list. She had at least one strikeout in all 36 appearances.

Wertz set a Blue Dragon single-game record with 18 strikeouts against Garden City on March 19. She had an 11-strikeout performance over 4 2-3 innings against Murray State on Feb. 19.

Wertz also had plenty to contribute at the plate as the Blue Dragon designated player for most of the season.